A Deeper Look At Outside In…Plot 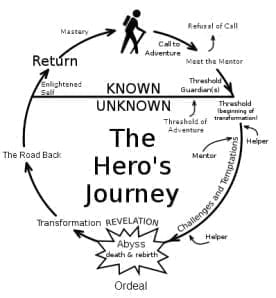 The path of the lead character twenty-eight year old teacher Brad Shepherd in Outside In is Joseph Campbell’s archetypal hero’s journey of departure, initiation and return. Brad did everything he was supposed to: he graduated from university, got a teaching job, coached after school, even attended graduate classes in the evenings. But after the overdose death of a student on the parent’s pain medication in Brad’s classroom, the parents sue and the school district lets Brad go to mitigate the lawsuit.

By losing his job and everything he had been working toward for the past ten years, Brad loses his sense of identity and induces what psychologist Erik Erikson referred to as a Quarter-Life Crisis, triggering doubt of the life decisions made and the steps to take going forward and inducing feelings of betrayal, isolation, and loneliness. This loss of self and the resulting confusion sends Brad away from his home in St. Louis to Put-in-Bay on South Bass Island in Lake Erie to rediscover who he is and hopefully return with what matters in life.

On his journey, Brad encounters many new experiences and people, often centering around alcohol, drugs and sexual experimentation, which are meant to represent updated  trials in Campbell’s monomyth. Working as bouncer at a popular island nightclub, Brad initially loves his new carefree lifestyle and friends, like Astrid, a hopeful Norwegian waitress, Cinch, an affable party boy and local drug dealer, Haley, a forlorn, alcoholic bartender, and Caldwell, a mysterious, mandolin player. Not always the best influences, these new friends represent opposing points of a compass pulling Brad in different directions, and he becomes more lost than ever.

It is often unclear in Outside In who the antagonist is that is preventing Brad from achieving his goal of a rediscovered self. Is it these supposed friends leading him down a destructive path for their own gains, is it life itself that he is battling, or is it himself and his own internal demons that thwart his quest? The uncertainty regarding the true enemy in the modern search for self is shown in the story when Brad visits Perry’s Monument and hears the famous quote Oliver Hazard Perry sent after winning the the Battle of Lake Erie in the War of 1812: “We have met the enemy and they are ours.” and he muses how we wishes he could meet his true enemy.

The events and actions of Outside In intentionally wander and unfold in a way to represent the lost and searching aspect of the characters. The characters talk more about passion and living life to the fullest rather than doing anything except escaping to whatever to whatever vice is available. To watch the flawed characters make the same self-destructive choices time after time can be quite frustrating, but it is meant to represent the excess and instant gratification so prevalent in contemporary society and elevate the discussion of addiction and self-medication. Before judging the characters, actions or events, take the time to peel back the layers and examine what they might mean in the context of your own inside and outside worlds.