From Memorial Day until the student workers and tourists leave in the fall, the island community of Put-in-Bay, Ohio thrives on alcohol, drugs, sexual experimentation, and any other means of forgetting responsibilities. To Brad Shepherd—recently forced out of his job as a junior high math teacher after a student overdoses on his parent’s pain medication—it’s exactly the kind of place Brad’s looking for.

Allured by the comfort and acceptance of Haley, a forlorn, alcoholic bartender, Brad trades his academic responsibilities and sense of obligation for a bouncer’s flashlight and a pursuit of the endless summer. With his new roommate, and local drug dealer, Cinch Stevens, at his side, Brad becomes lost in a haze of excess and instant gratification filled with romantic conquests, late night excursions to special island hideaways, and a growing drug habit. Not even the hope from a blossoming relationship with Astrid, a bold and radiant Norwegian waitress, nor the mentoring from a mysterious mandolin player named Caldwell is enough to pull him out of his downward spiral. But as Labor Day approaches, the grim reality of his empty quest consumes him. With nowhere left to run or hide, Brad must accept that identity cannot be found or fabricated but emerges from within when one has the courage to let go.

A look at one man’s belated coming of age that’s equally funny, earnest, romantic, and lamenting, Doug Cooper’s debut novel explores the modern search for responsibility and identity, showing through the eyes of Brad Shepherd, how sometimes we understand who we truly are by becoming the person we’re not. 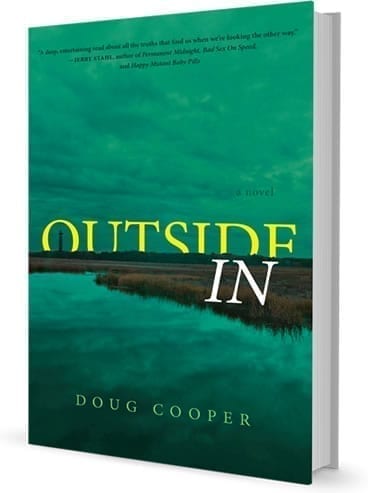 “Blake said the road to excess leads to the palace of wisdom-but he never spent time in Put-in-Bay, where the pleasure-hungry hero of Doug Cooper’s Midwest saga Outside In goes to forget himself and refind his wild side. For this debut novel, Cooper has fashioned a modern parable of Shangri Law morphing into The Inferno.The author owns a poet’s eye and an ear for the funny/tragic dialogue of the American lost and searching worthy of comparison to Mamet, Sherwood Anderson, and Joy Williams. A deep, entertaining read about all the truths that find us when we’re looking the other way.”