A Deeper Look at Outside In…Characters

Since Outside In is classified as literary/new adult fiction, the characters more than the action are the focus of the novel. In developing the five main characters — Brad, Astrid, Cinch, Haley, and Caldwell — I intended to create the structure of a compass with the protagonist Brad at the center being pulled in different directions by the supporting characters who represent opposing emotions. 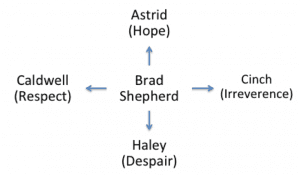 Astrid is the strongest and most positive symbolizing hope; Cinch is the affable party boy with a “Who cares?” and irreverant attitude; Haley with her bitter and insecure disposition embodies despair, standing opposite Astrid; and on on the other side of Cinch is Caldwell, a wise sage, beaten and battered by his life experiences, representing respect.

As was mentioned in the deeper look at the themes of Outside In, the characters all to some degree live their lives from the outside-in. They hide behind masks and veils to protect themselves, talking about passion and living life to the fullest rather doing anything except escaping to whatever vice is available. Even Caldwell, depending on whether the reader interprets his advice as truths or platitudes, could be viewed as a coward hiding from the world in the mysterious, although cliched, island drifter persona he has created. Astrid is the only one who, watching Brad make the same mistakes overhand over due to his fear of actually asserting himself, realizes her attraction to the island is the haven from real life that it provides.

The characters, and this is one of the most misunderstood points of Outside In, are intentionally frustrating and meant to make the reader uncomfortable. Their immature and irresponsible reactions and impulse for excess and instant gratification are intended to reflect the proliferation of that behavior in modern culture. They function as a mirror to show the less desirable traits we all possess and are all in one way or another lost. To find their way, they put themselves in environments to create the image of who they think they should be instead of allowing their trues selves to emerge.

Even the character names, from the main characters to the ones with supporting roles, have been chosen to say something about that person and also have a common theme connecting them all. But I won’t reveal all the secrets here. Just as one has to unwrap a present to appreciate the contents, peel back the layers and see beyond the party in Outside In.